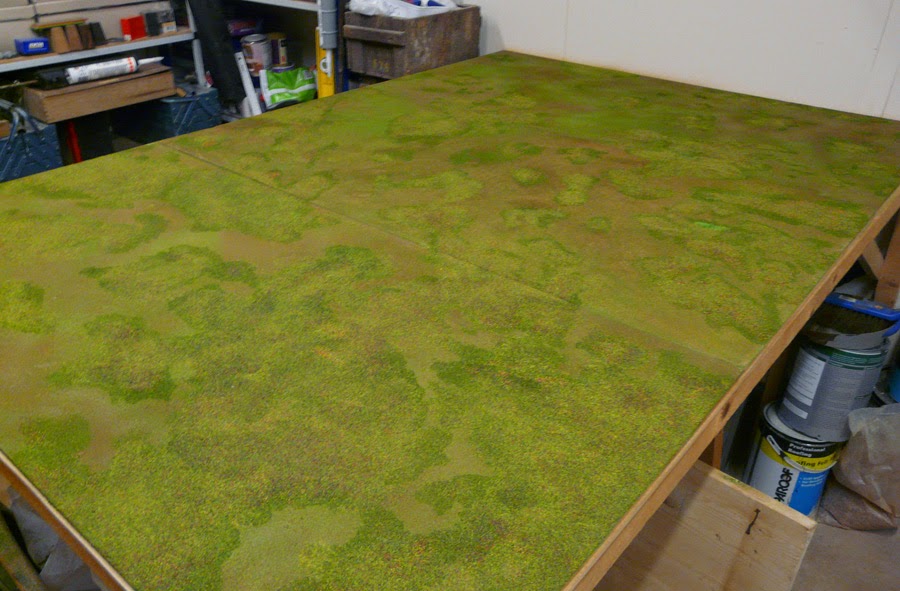 For quite some time, I've been thinking of doing some terrain boards. For all the reasons everyone can think of, I've never got around to this fairly space and time consuming activity but recently, I took a bite of the bullet and just got stuck in, and gave it a try.

Having all the bits and materials I needed already, I went for the tried and trusted MDF 4'x2' s and went for a textured and flocked board.

I had already been thinking of doing some modular terrain boards (well, I've been toying with idea's for this for years really) using 2" styrene sheets and doing some modelling and landscaping. Once decided to get stuck in and just do something I decided some trial work would not go amiss and see how things went on a simple project before doing something a bit grander, so the boards were born.

To get the most likely use from the boards, I decided to go for a moorland/scrub look which could be used for a fair variety of games including general skirmish and wasteland terrain settings. 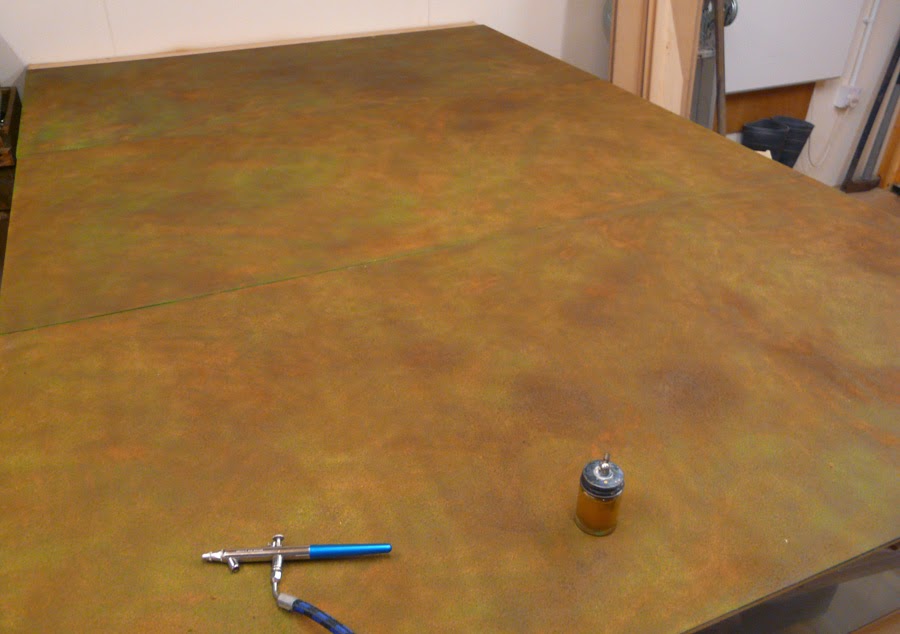 The boards were first emulsioned with a medium green from the local DIY store. I've noticed with the current indoor decorating fashion for 'feature' walls, the paint manufacturers are now releasing some good middle tone strong colours so some good greens, earth and sand tones are easily available, which is nice.

Once dry the boards were coated in diluted PVA and covered with a very fine dry sand. In this case the sand was from the beaches of Morar which is fine, non-porous and free.

After the PVA was dry I started air-brushing the boards in a fairly random fashion with a acrylic Raw Umber and Raw Sienna 50/50 mix, building up some random light and dark areas. 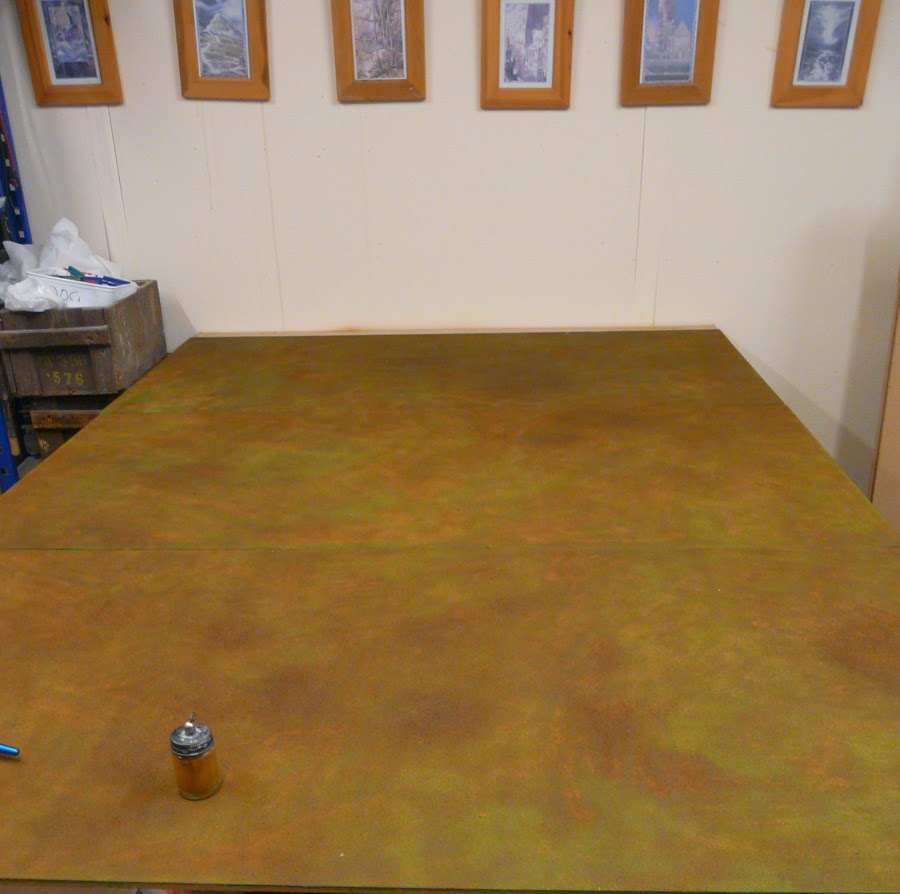 I continued over a couple of evenings building up the depth of colour and ensuring the entire boards were covered more or less and making sure the white colour of the sand didn't show through. 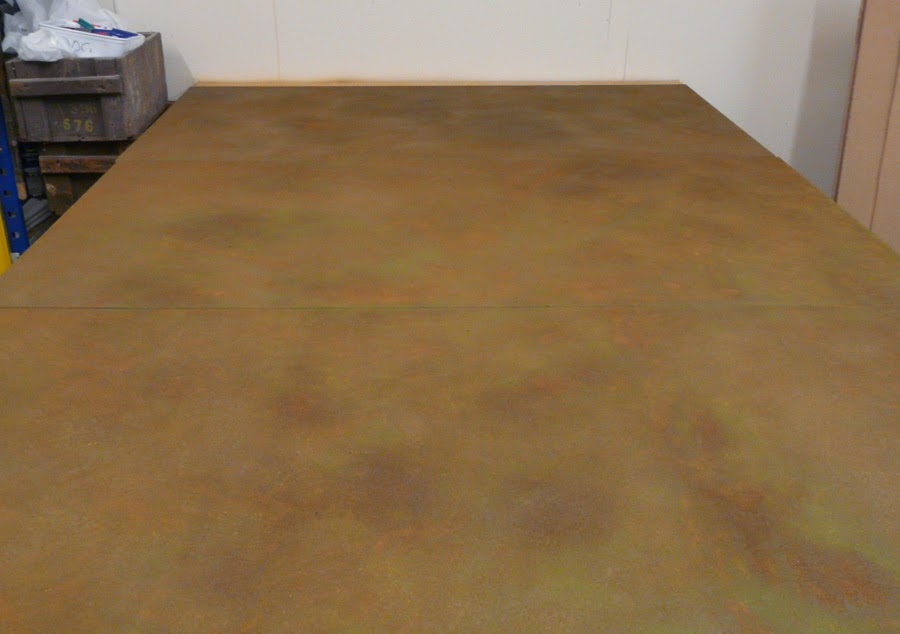 Once I was happy with the 50/50 mix coverage, I then lightened the mix with a 40/60 mix and adding in a dollop of Naples Yellow giving the colour a more sandy tint 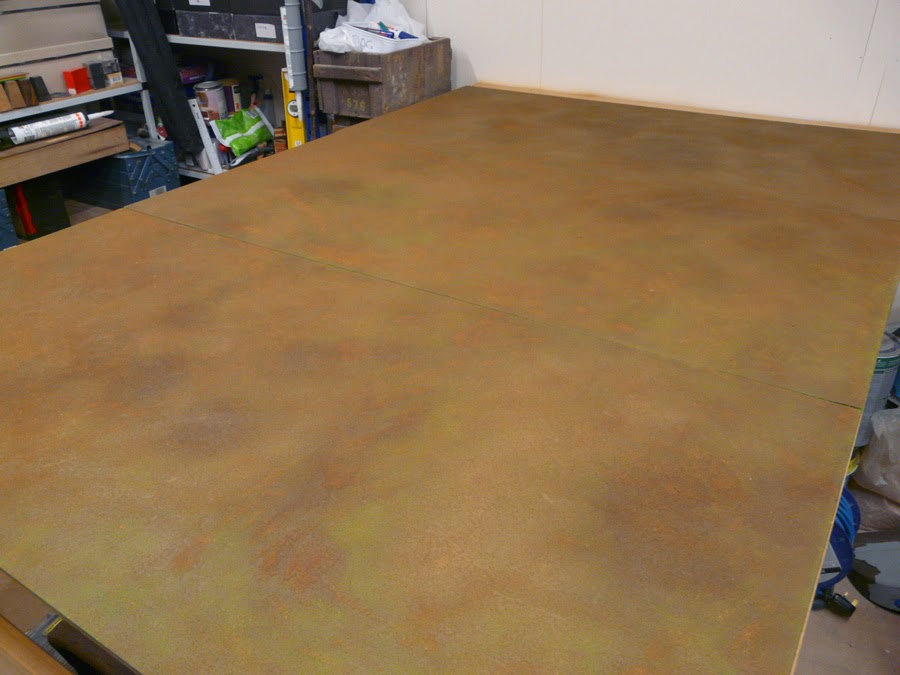 This mix was then air-brushed pretty evenly over the whole area of the boards in a couple of coats, again over a couple of evenings. 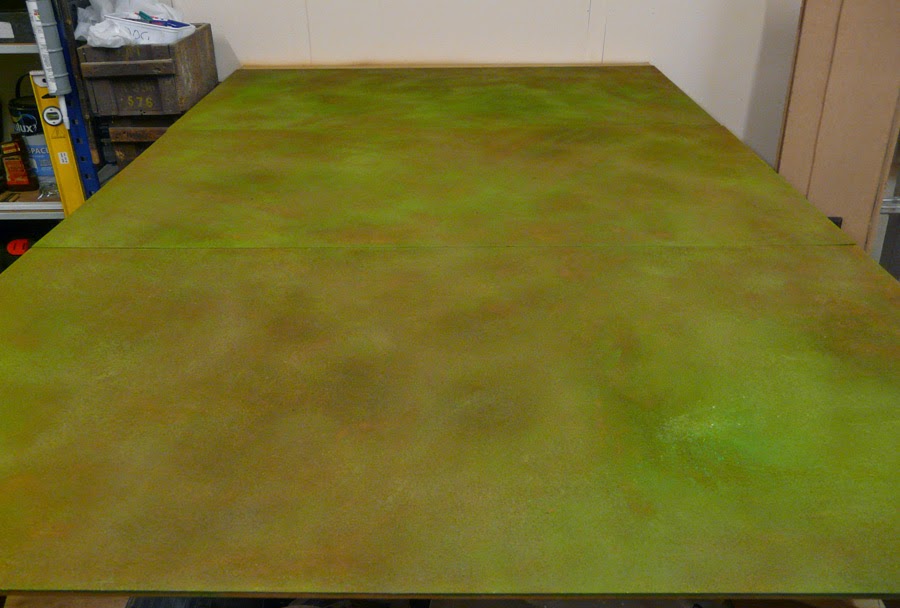 I then picked a few areas at random and gave these a deeper coverage of the sandy mix to pick out some of the areas previously detailed. This seemed a good place to stop with the paint and start flocking. I also added a very light dusting of a mid and light green spray I had in a couple of spots just to vary the feel a bit on each board. 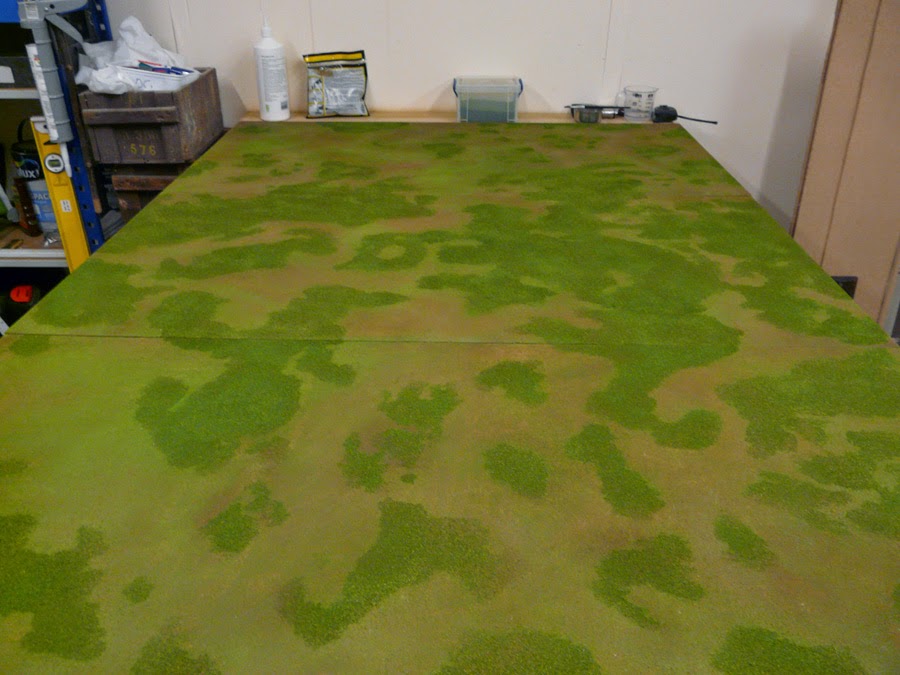 To keep to the scrub or moor feel, I had decided to keep a good proportion of the boards 'bare earth'. So roughly, one board was to be half flocked, one a third and one two thirds.

Again the trusty PVA came out and a good ground base cover flock was applied (using a handy kitchen sieve to get a more even coverage) in random areas but keeping an eye on the light and dark areas, the flock generally being applied to the darker areas. This was allowed to dry over night. 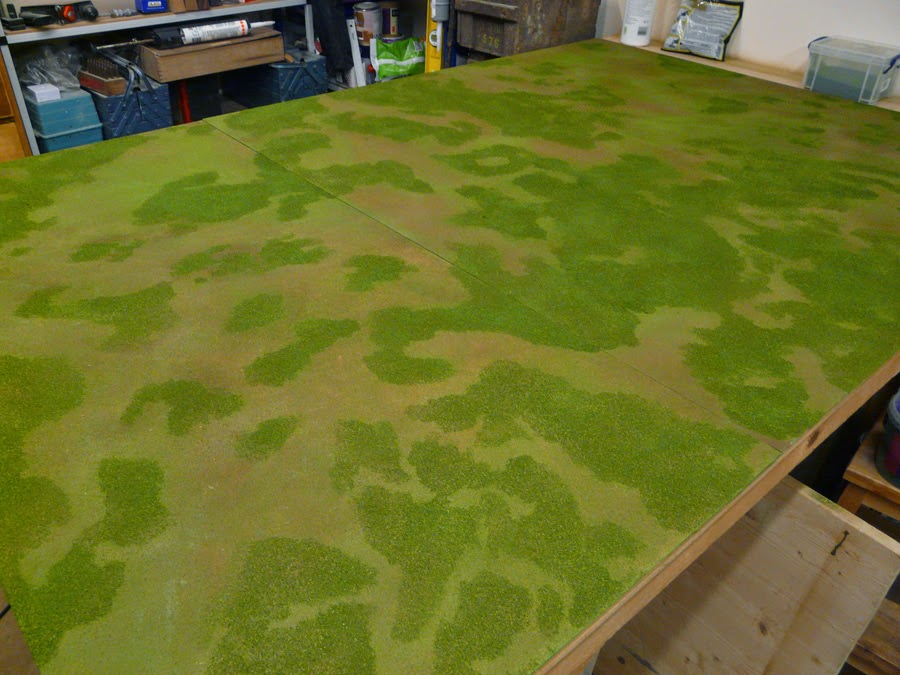 Once this had dried, a couple of small bits were added to 'fill in'. 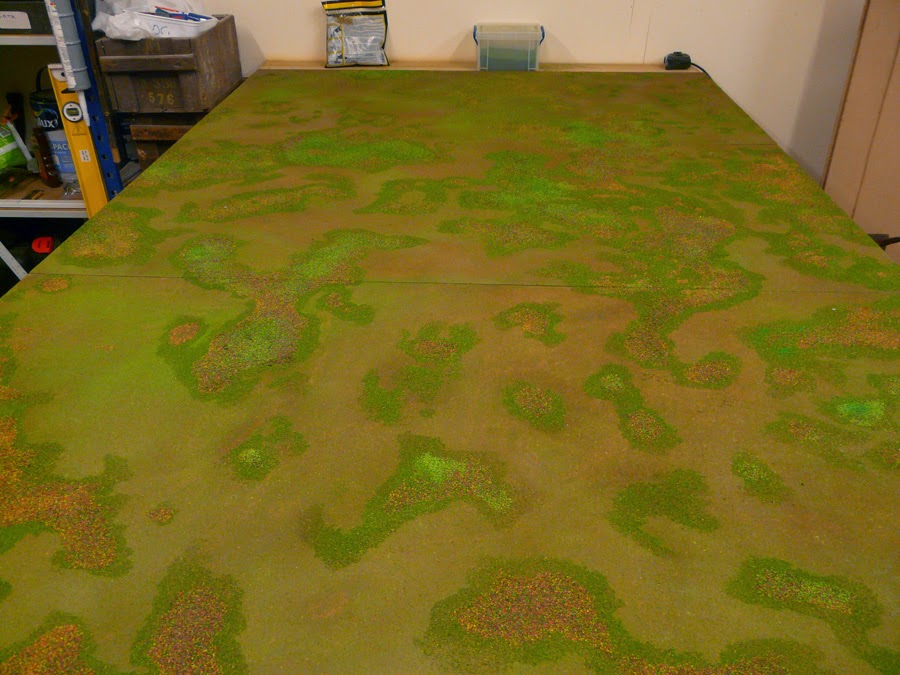 After this base layer was thoroughly dry, a summer mix traditional flock was applied to the areas base layered. This adds a varied textere and colour mix to the flocking which I like. 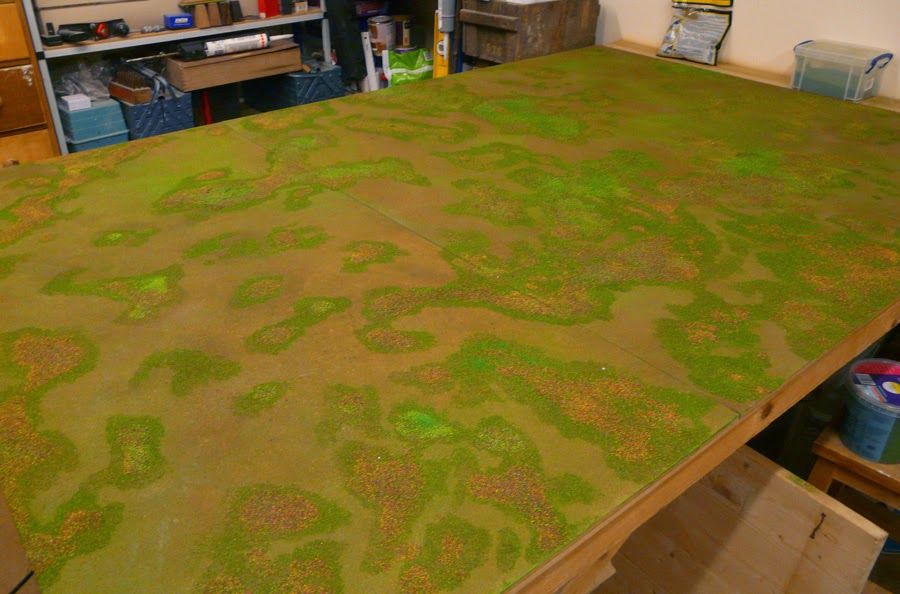 A few, very small areas were sprinkled with a light green traditional flock. 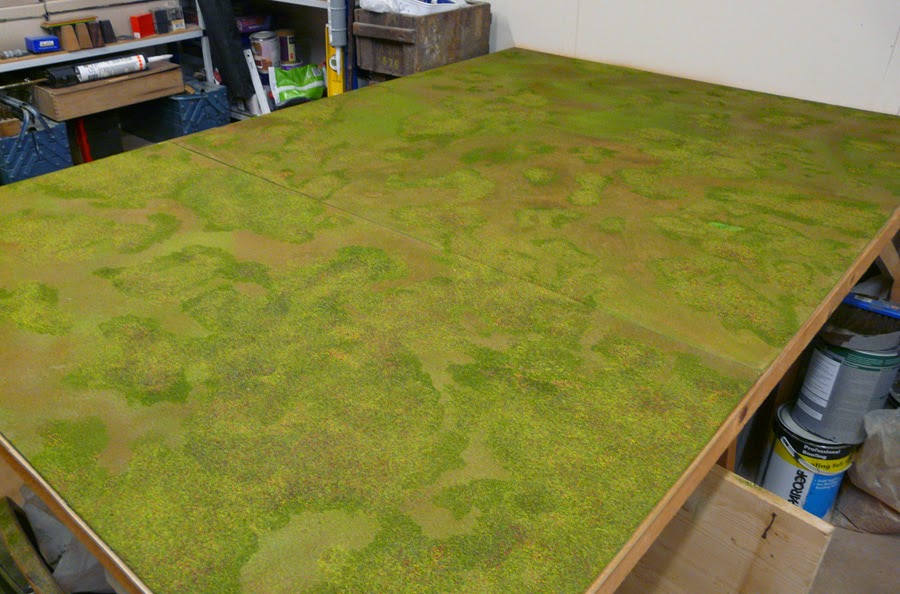 After all the previous layers were completely dry, the 'final' layer of grass was  applied using a mid-tone static grass, again generally keeping to the areas already flocked but keeping away from the edges, to get a graduation in colour and leaving a few bits of the summer mix showing through here and there.

Now, I had to stop myself. I had thought to do a few light green areas using some light green static grass and maybe a few random dark green foliage to simulate heather or similar, but stopped myself. I would like to have a greater variety of colour textures across the boards but practicality crept in and adding these bits would begin to add height to the boards so might start to impinge on the use of the boards and laying terrain pieces on them might not sit right. I'm going to leave them as is for now and see how they wear. A few areas of the static grass could do with a bit of thickening but we'll comeback to that after trialling the boards with a few games first.

One thing I did try which failed completely was attempting to spray the diluted PVA. This didn't work at all with the spray bottles I tried with just spitting jets of the glue rather than actually spraying, so all the PVA was all applied laboriously with a brush.

I'm going to investigate into spraying the dilute PVA further as this would be a big speed up to the whole process. 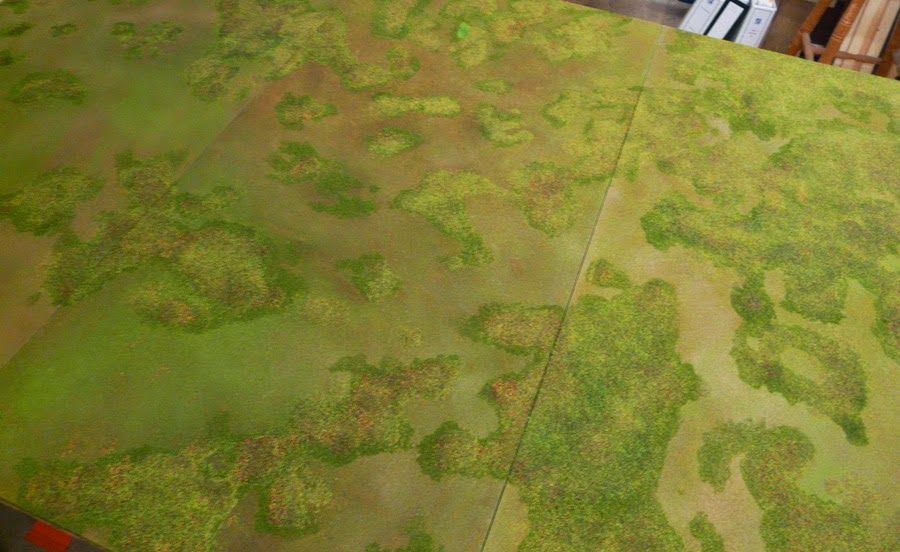 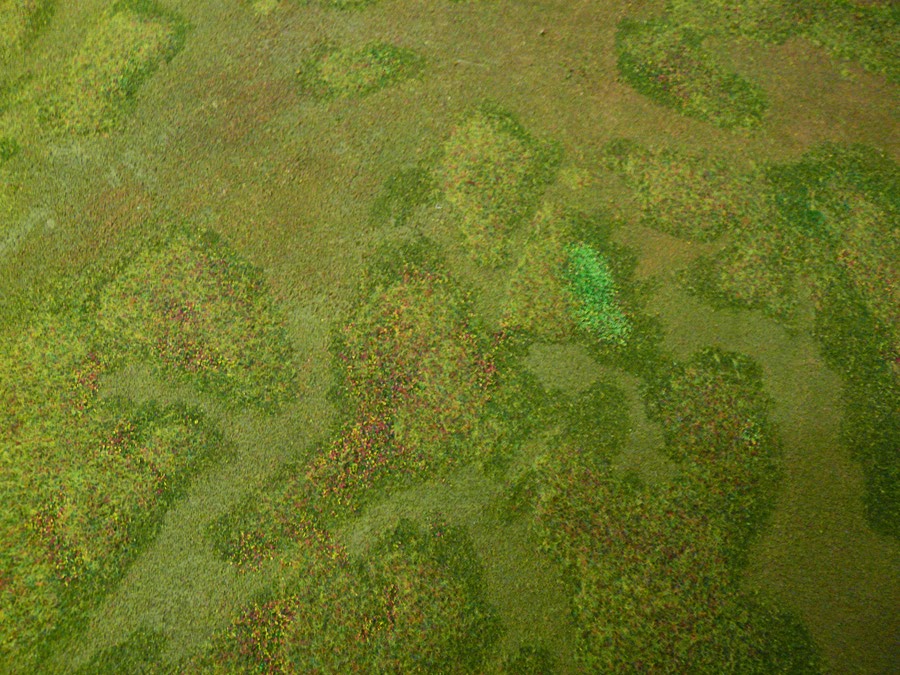 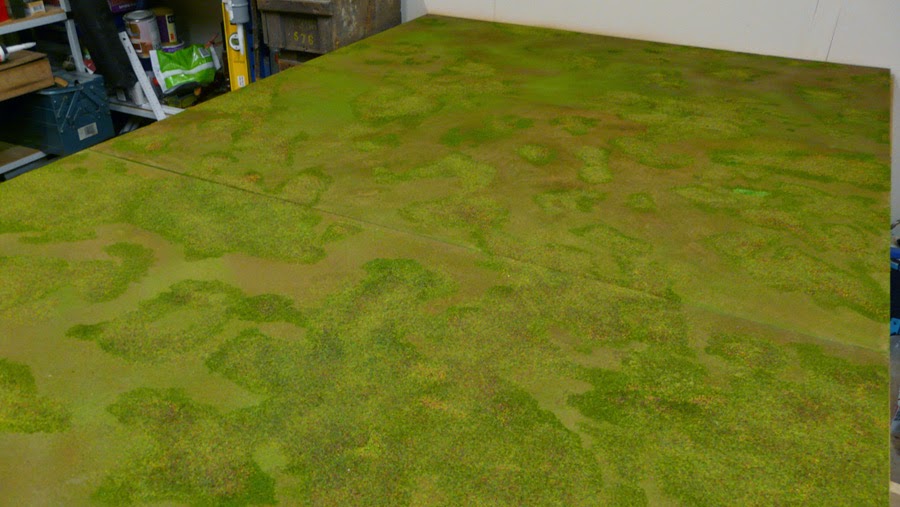