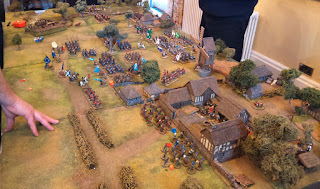 Yesterday, was the first (hopefully annual) Scottish Battlefield Trust Wargames Show. The event held in Prestonpans on the east coast of Scotland, a stones throw away from Edinburgh on an unfortunately unwelcoming, wet and windy day.

A fairly small affair, being the first, but certainly an enjoyable trip out in a interesting and unusual venue. Held in the Prestongrange Gothenburg 'The Goth' which is a listed building, pub/microbrewery/restaurant and venue which certainly gave the event a sense of atmosphere with a number of paintings on the wall several depicting events around the time of the battle of Prestonpans. There was also a presence from the Allan Breck Re-enactment society who also had a small game on show, dressed as a Jacobite and a Redcoat both of whom gave a sense of period to the proceedings. 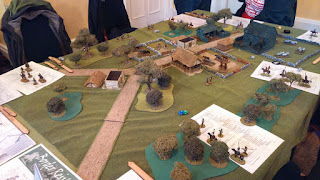 Several local traders had a presence at the event including Templar Wargames and Claymore Castings and a few others, and Warwick Louth (the organiser of the event) also sold a selection of period historical books at the desk. 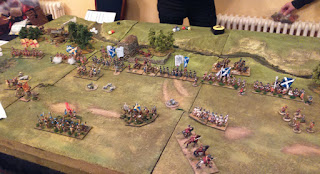 A selection of games were on show from Falkirk Wargames Club's 'Border Reiver' game where you could lift some cattle, League of Augsburg's interesting Battle of Killiecrankie, and a rather spiffing ECW game among others. 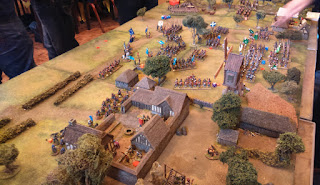 I had my better half with me 'on tour' as we were headed home, passing Ikea on the way so a 'two dead bird's' event seemed in order and I picked up a few storage bits and Jaqui managed to drool over some soft furnishing, so every body happy there.

After touring the delight's of the show, we went for a pretty good lunch downstair's before heading home and though I could not partake of the micro-brewery's output at the time, I did manage to take a small libation back home for later sampling.

A great first event, which went well and promises good things for the future in a very interesting venue and well done to all taking part and organising the event. I look forward to next year's show with interest.