OK, it's been a while. I know, it's been lax of me but I have an excuse. Well... actually I don't. Just the usual stuff but I have been getting a few things done hobby wise ticking away and scratching at the lead mountain behind the scences (and adding the the pile too, especially terrain, but that's a different story). Just not a lot to add to the blog completeness-wise anyway, but still kicking and playing about with stuff when I have the mind.

One bit that's been getting picked at is the next warband for the skirmish game I had planned eon's ago from the land that was the Covid Wastes of Isolation. This is the promised 'Glitter Twins'.

The Glitter Twins is the disparaging nick-name for the two sisters, Elpeth and Melinda Thimmyn-karr. Adventurers of some distinction around northern Tir-Mor and eastern Fayrenneth.

The sisters are rumoured to be ex-devotee's of the Elistainian patron goddess Kyenna, Elistain being their home land around the southerrn province of Thyr-Aranrith. This may be true as both sisters are powerful elemental spell casters with the nick-name coming from their showy style of casting and theatrics while abroad.

The figures are the original Sigilist and Apprentice models from the Frostgrave range, with some experimental bases constructed using a terrain roller from GSW for an intial trial. 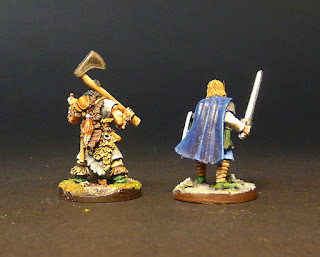 Medlunga and Douchrie are the Sister's warbands heavies and are both skilled and resourceful fighter types. Medlunga, hailing from the wilds of central Fayrenneth beyond Elistain, Mernoth and Dalriada, is a man of few words, apparently not speaking a word of Elistainian, or any of the local languages, he has been with the sisters since they ventured away from Elistain at the beginning of their journeys.

Douchrie is almost the opposite type of man, being a self-styled gentleman of from northern Tollandor and a third son of a unlucky noble who had picked the wrong side in the current War of Rulership raging across the area. Douchrie is besotted with the younger sister Elspeth, a fact she plays on to good effect, and Douchrie will defend and protect Elspeth to his last breath.

Both the figures are once again from the Northstar Frostgrave range, picked up from the first couple of Nick-starters, and these two have a more traditional basing style. 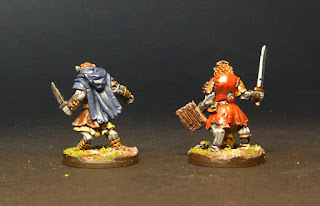 The two Gnoll Mercenaries Gnarlich & Kanta Meb hail from the same tribe of dog-soldiers resident around the border of eastern Elistain and northern Cellebria. Typical of all Gnolls, they are rapacious and ruthless, however they do appear to have some degree of loyalty to the sisters beyond their pay and booty and it is rumoured that the sisters had performed some task in the past for the Gnoll's tribal Matriarch and the two fighters are 'payment' for this service.

Yet again, both figures are from a Northstar Nick starter purchase and are part of the Frostgrave range. Again standard dirt and grass basing for these two. 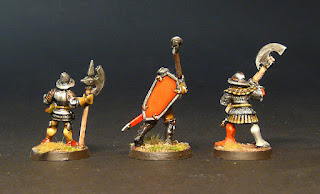 These guys are standard hired muscle and hail from different countries in and around northern Tir-Mor area. Arch, an ex-soldier of some years comes from western Moonandor. Toug is a Lornian from Eridann and has a history of working for crime families in and around Thule and probably had to be somewhere else in a hurry. Flannah comes the Sonnorian League lands on the southern coast of the Moonandorian eastern seaboard with a history of indentured service with one of the Merchant families there.
Two the these bods are well OOP Citadel fighters from the first slottabase fighter range and have been kicking about at the bottom of a box since some time in the 80's. Now finally painted up. the middle figure is a mix up from the old Empire Militia box set with arms and hammer from the old knights set and a Chaos Warrior shield to complete, being assembled some years ago and partially painted but now complete and ready for battle.
The three figs all having standard dirt and grass basing to suit.
With this band complete, the project nears completion with the third band around half way complete, being the 'Merchant Adventurrers' the last of the trio of intagonists so will endeavour to complete some and actuall y play through the planned encounter 'Bad Day at Ganish-Aer'.
Watch this space.
Posted by Hendrid at 01:06