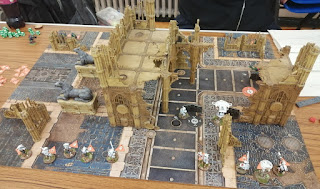 This weeks game at the club was by way of a first trial of the new (well from last year but new to us) edition of the Kill Team Rules from GW.

Myself and Andy W set up the basic matched play game with no frills and Tac Ops choices to deal with, Andy going for Ork Kommando's and myself going for the baisic Tau Hunter Cadre lists. 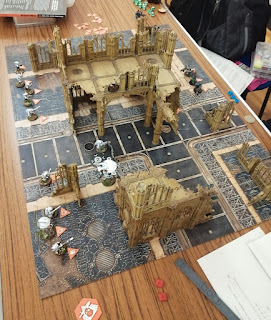 Got to grips with the rules fairly quickly but as things were fairly new it took a fair few refering to rule books for stat confirms and ability effects, so for a quick play game it was fairly slow but to be expected for a first trial.

Didn't get the game to a conclusion before running out of time, with half time score of 4:2, advantage to Andy, but with half the board in Tau control and with a slight numerical advantage, it was still anybody's game.

We both thoroughly enjoyed the game and will be giving it another go soon with a better understanding of the rules so hopefully get a conclusion next time maybe with a batrep to boot.