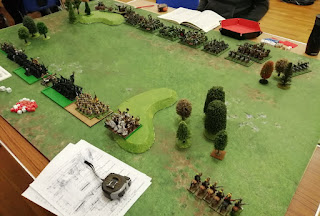 Managed to have a Warhammer Fantasy bash at the club this week. First WHFB's outing for my Empire chaps in over 8 years (which happened to be a 6th Ed game too) and around 5 since last outing at all with the troops, then with the 9th Age rules.

Had had a couple of chats over the interweb during Covid about looking out the old 6th Ed stuff and finally got around to arranging a game with Kev and his Orc Boyz and game was duly played this week.

Managed all the rules OK with memories providing most of the details and only a couple of look ups required for a couple of details so both pretty pleased with brain power here as we both expected to be struggling but all pretty much fell into place once we got going.

The game was most enjoyable and won't put down a blow by blow account of the action, but suffice to say being seriously outnumbered from the get go and a poor deployment sealed the Empire's fate for the result. Though it wasn't all one sided and managed to score a couple of minor victories it was a well deserved overall victory for the Orks. Only three Empire units left on the field at the end and them pretty badly mauled and the Orcs still having 6 or so largely intact units rampaging about.

I did do my usual with my artillery and the Great Cannon blew up on it's first shot Rd 1 to much merriment, pretty standard for my luck with artillery dice unfortuneately. Kev also had similar luck with his wizard on his 2nd spell with the Gobbo type's head exploding, also producing much laughter. 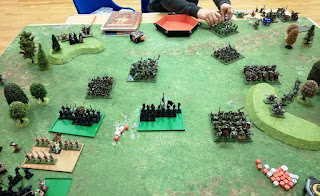 The game produced quite a bit of interest on the night and a couple of bods expressed interest in digging out their 6th Ed armies for a bash, so all good from that point of view.

So there's likely to be some more 6th Edition action coming up, hopefully in the near future, and I'll endeavour to put up a better showing with the chaps in black & yellow. (I feel a gun line coming up with no doubt an explosive result). Watch this space for the next exciting episode soon.